What Is Thermal Bridging?

Before qualifying as an Architectural Technologist and Energy Assessor, I had never come across the term "Thermal Bridging" or cold bridging, but as a homeowner I had certainly experienced its effect.  I now understand why, having sealed up drafts around windows in our converted barn, we ended up with mould growth in the corners of the window frame and the window reveal.

Thermal bridges are areas of a building construction where there is a reduction of, or interruption or break in, insulation, resulting in higher heat transfer than surrounding materials.  They often occur at junctions or interfaces between building elements, for example where timber studs form a break in insulation as shown below. 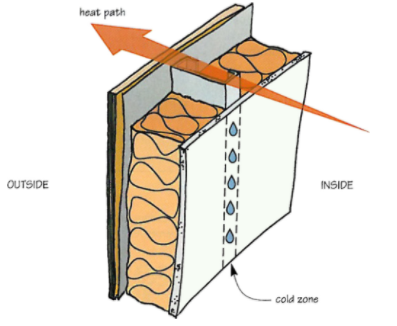 It is estimated that as much as 30% of heat loss from a building occurs as a result of thermal bridging.  However, concerns about thermal bridging are not limited to heat loss, as moisture in the internal air will be attracted to the cold zone and may condense, opening up the potential for mould growth over time.  Mould growth results in spores circulating in the indoor air environment which can cause or exacerbate respiratory conditions such as asthma, and which can cause allergic reactions amongst building occupants.  Thermal bridging is therefore about health as well as heat loss!!

The heat loss from linear thermal bridges is expressed as a linear transmittance value, or psi value.  The UK Government publishes Accredited Construction Details (ACDs) which are designed to minimise the effect of thermal bridging.  ACDs provide standard junction and interface details for different types of construction, along with checklists for designers, builders and building inspectors to use.

There are two further types of linear thermal bridges:

Repeating Linear Bridges - as in the above example where there are regular bridges at fixed intervals within an element - these are accounted for in the U value calculations for those elements.

Non-repeating - occurring at junctions between building elements.  These are not accounted for in U value calculations for elements and therefore need to be included separately in the calculation of heat loss from the building.

As energy assessors, we are often called on to model thermal bridges in new builds and conversion projects.  Currently, building regulations allow us to use default values (which typically lead to poor thermal performance), accredited construction default values (which require evidence to be provided that ACDs have been followed) or client provided psi-values for different junction types (which need to be provided by suitably qualified staff).  Most homeowners and a large number of builders and developers don't have a sufficient understanding of thermal bridging or the associated topics of psi-values and ACDs., so we have produced this short article to hopefully demystify the subject.  UK Energy Assessors are qualified Domestic On Construction Energy Assessors and are accredited to produce U value calculations and Non-repeating Linear Thermal Bridge Calculations - these form an optional part of our service for SAP calculations.

Want to know even more?  Our forthcoming article on Calculation of Non-Repeating Thermal Bridges explains the full process of these performing calculations in a manner that is compliant with SAP 2012.